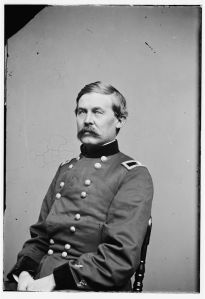 Few would dispute the performance of Gen. John Buford on July 1st at Gettysburg.  He did an excellent job of fighting his division, especially since he was short one brigade.  The Reserve Brigade, without question his favorite in the division, was miles away guarding the wagon trains of the Army of the Potomac at the time of the biggest fight of his career.  The fact that he accomplished all that he did on that July day is not only a tremendous credit to Colonels Devin and Gamble, but to Buford’s ability to employ unfamiliar commands effectively.

It is an established fact that Gen. Buford preferred regular units to volunteers.  While the performance of the 6th Pennsylvania Cavalry during Stoneman’s Raid went a long way toward changing his mind about volunteers, there can be little doubt that he would have preferred to have the Reserve Brigade with him on July 1st.  Indeed, he requested their return several times prior to that morning. (OR, Vol. 27, pt. 1, pgs. 923-924)

Why was the Reserve Brigade guarding wagon trains?  The answer is simply attrition, of officers even more than enlisted men.  By the end of June 1863, the brigade was simply fought out, and needed a day or two to reorganize before returning to the fight.  During the preceding two months, each of its regiments averaged losses in excess of 15% of their enlisted strength and nearly half of their officers.

At the end of April 1863, just prior to Stoneman’s Raid, this was the strength of the regiments of the Reserve Brigade.  Data for the 6th Pennsylvania is not shown.

A full strength cavalry regiment was authorized 12 companies, including 42 officers and 1,100 enlisted men at this point in the war.  The companies present with the brigade averaged 1.3 officers and 40.9 enlisted men.  The brigade was commanded by a major, and each of the regiment’s by a captain.

At the end of May 1863, after Stoneman’s Raid and prior to Brandy Station, this was the brigade’s strength.  Data is unavailable for the 6th Pennsylvania. (National Archives, RG 94, Returns from Regular Army Cavalry Regiments, 1833-1916. Hereafter “Regimental returns”)

Despite the addition of three officers and three companies, enlisted strength was down by 52 men.  Many of the losses were to the dismounted camp near Dumfries for mounts to replace those lost in the raid.  Each company still averaged 1.3 officers, but only 36.7 enlisted men.  The regiments were commanded by one major and three captains.

At the battle of Brandy Station, General Buford used his 1st and 2nd Brigades primarily defensively after crossing the Rappahannock and losing Colonel B.F. Davis early in the battle.  Once his lines were established, he used the Reserve Brigade for the majority of his attacks on the Confederates, first at St James Church, and later on his right flank.  These attacks resulted in correspondingly higher casualty rates for the brigade.  The 1st U.S. Cavalry picketed north of the river for the majority of the battle, and saw very little fighting.  The Gettysburg Campaign in Numbers and Losses by J.D. Petruzzi and Steven Stanley provides an excellent roll-up of regimental strengths and losses by engagement for the campaign.  Their numbers for the battle of Brandy Station are listed in the table below. (Petruzzi and Stanley, The Gettysburg Campaign in Numbers and Losses, pgs. 5-6. Also, OR, Vol. 27, pt. 1, pg. 905.)

Total losses for Buford’s right wing in the battle, including the infantry brigade, were 471.  The Reserve Brigade losses of 319 were 67.7% of this total.  As devastating as these numbers appear, they may be conservative.  The commander of the 2nd U.S. Cavalry during the battle, Wesley Merritt, later reported 8 of 14 officers were killed or wounded, and 68 killed or wounded of only 225 engaged.  These equate to losses of 57% of officers and 30% of enlisted men in this regiment. (Rodenbough, From Everglade to Canyon, pg. 290.)

The campaign continued, and the brigade rode north with the rest of the division.  Less than two weeks later, on June 21st, the division engaged in another battle at Upperville. (Petruzzi and Stanley, pgs. 33-34.)

Again, these numbers may be conservative, as Captain Cram of the 6th U.S. Cavalry claimed in his official report, “The regiment marched out 12 commissioned officers and 242 enlisted men strong.” (OR, Vol. 27, pt. 1, pg. 947.)  This would increase the regiment’s loss to 3.6%.  During the battle, Gen. Buford again employed the Reserve Brigade as his primary attack force, and they paid commensurately. The 1st U.S. Cavalry, who had missed much of the previous battle, figured prominently in this one.  Division losses for the engagement totaled 115.  The Reserve Brigade, composing 39.8% of the division’s strength, suffered 54.7% of its casualties.  Two more officers were lost, one each from the 1st and 6th U.S. Cavalry. (Ibid., pg. 922.)

By the end of June, conditions within the brigade had changed dramatically from just one month before.  Regular regiment strengths as reported on their monthly returns for June 1863 are listed below. (Regimental returns.)

While enlisted strengths remained roughly the same per company, primarily due to replacements from the dismounted camp as mounts became available, officer strengths had plummeted.  Over the month, 21 of 52 officers were lost killed, wounded or missing, a loss of 40%. (Ibid.)  This left less than one officer per company.  Despite the continual reinforcements, companies remained at 40% strength on average, with near-constant disruptions to the ranks.  Additionally, the brigade received its third commander of the month on June 30th in the person of newly-promoted Brigadier General Wesley Merritt. 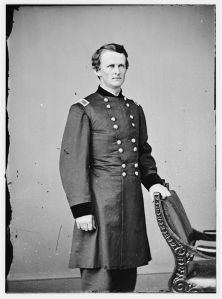 Fortunately, 21 of the remaining 32 officers were former enlisted men in the regiments. (Ibid. Also, National Archives, RG 94, Register of Enlistments in the U.S. Army, 1798-1914 and Heitman, Historical Register and Dictionary of the United States Army, Volume 1.)  The brigade was still an experienced, battle-hardened formation, it simply needed a couple of days to reorganize.  This was proven on July 3rd and throughout the pursuit of the Army of Northern Virginia following the battle of Gettysburg.

To some extent, however, the loss of the Reserve Brigade may have done much to reveal Buford’s battlefield acumen.  Had they been present, it seems very likely that he would have relied on them heavily once again.  Instead, he was forced to utilize the tools he had at hand, specifically his other two brigade commanders.  Both were very capable cavalry leaders, they simply had not yet had a good opportunity to demonstrate their ability to their division commander.  They proved themselves in the crucible on July 1st.  The lessons that Gen. Buford learned about them and their commands in this fight greatly enhanced his ability to fight his division through the rest of the campaign.  A look at Gen. Buford’s reports from the campaign will show that he maneuvered the division differently before and after the fighting at Gettysburg.  Following the battle, they appear to have much more autonomy in their movements.

Daydreams of the Soul