Richard Fitzgerald was born in County Waterford, Ireland in 1838. After immigrating to the United States, he worked as a fireman prior to serving in the army. He was enlisted into the General Mounted Service by Lieutenant Magruder in Baltimore, Maryland on January 20, 1859. His enlistment documents describe him as 5’ 10” tall, with brown hair, hazel eyes and a ruddy complexion.

At this period, the General Mounted Service meant assignment to the Cavalry School at Carlisle Barracks, Pennsylvania and various recruiting assignments. Fitzgerald rose through the enlisted ranks, and was serving as a first sergeant in the permanent company at Carlisle Barracks service when he was appointed a second lieutenant in Company I, 5th U.S. Cavalry on November 7, 1863.

Cavalry depot commander Captain David Hastings of the 1st U.S. Cavalry submitted the recommendation for his appointment, which was also signed by every officer assigned to the depot. It read: “Sergeant Hastings is well instructed in all the details and duties relative to the mounted service, and will make an excellent Cavalry Officer. His character and services justly intitle [sic] him to that position: he done some good service, as first sergeant of the permanent company of this Depot, in the recent battles in Pennsylvania and Maryland.”

Lieutenant Fitzgerald joined his regiment at Mitchell’s Station, Virginia the following month. He served there through the winter and spring, including skirmishes at Barnett’s Ford, Charlottesville, Stanardsville, and Morton’s Ford. Although assigned to Company I, he spent very little time there. He was on special duty commanding Company E from January to March, then shifted to Company M in April as the spring campaign began.

He led his company ably in the Overland Campaign and Sheridan’s two raids toward Richmond. He was promoted to first lieutenant in Company I on June 12, 1864, replacing former sergeant major Joseph P. Henley when he was killed at Trevillian Station. Fitzgerald continued to command Company M as the regiment was transferred to the Shenandoah Valley.

Lieutenant Fitzgerald led his company well in the near constant skirmishing that comprised the first month of the campaign. During the battle of Opequon on September 19, 1864, “he was killed while gallantly leading his company in a charge against the enemy.” He is buried in the military cemetery at Winchester, Virginia. 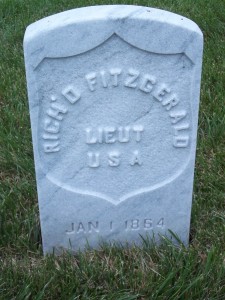 Today marks the 150th anniversary of the battle of Opequon, or Third Winchester. While the cavalry was primarily involved in the larger fight at its culmination, with the first of the large scale charges that became its hallmark under Sheridan, they still had a busy day.
Rather than try to hastily sketch the battle into a blog post, I have decided to let one of the participants tell the story in his own words. For those desiring more in depth information on the battle, I strongly recommend The Last Battle of Winchester by Scott Patchan. It is the best treatment of the battle that I’ve seen.

The closest commander to the source for my purposes is Reserve Brigade commander Colonel Charles R. Lowell. He served through the Peninsula campaign as a lieutenant and captain in the 6th U.S. Cavalry before he was selected to command a regiment of volunteers, the Second Massachusetts. This was his first major engagement as a brigade commander.

The Reserve Brigade consisted of four regiments of cavalry for this battle. Since Colonel Lowell commanded the brigade, Lieutenant Colonel Casper Crowninshield commanded the 2nd Massachusetts. He was the senior regimental commander. Captain Eugene M. Baker commanded the 1st U.S. Cavalry. The 2nd U.S. Cavalry was commanded by Captain Theophilus F. Rodenbough until he was severely wounded near the end of the day’s fighting, then by Captain Robert S. Smith. Lieutenant Gustavus Urban, the former regimental sergeant major, commanded the 5th U.S. Cavalry. The 6th Pennsylvania, under command of Major Charles L. Leiper, was ordered to the remount camp at Pleasant Valley, Maryland on September 8th and was not present for the battle.

Colonel Lowell’s report for the period encompasses two weeks of maneuver by the brigade, so I have excerpted his words on the battle:

“September 19, marched at 2 a.m.; reached Opequon at Seiver’s Ford before daybreak. The enemy’s picket-line was driven in by Second U.S. Cavalry and Second Massachusetts Cavalry, about forty prisoners being taken, and the opposite bank of the creek occupied in a line of about three miles, the right connecting with the First Brigade. A very gallant charge was made by Second U.S. Cavalry on one of Breckinridge’s batteries, but was repulsed, the infantry supports being well placed behind rails breast high, a simultaneous charge by the First Brigade being also repulsed. Soon after noon the whole line was advanced to the Martinsburg pike; the brigade was necessarily much scattered. Two squadrons of the Second Massachusetts Cavalry joined the charge of the Second Brigade on the enemy’s infantry; the rest of that regiment got mixed up with the skirmish line of Averell’s division. The First, Second, and Fifth U.S. Cavalry advanced toward Winchester, on the left of the pike; charged a battery supported by infantry and cavalry; captured two guns, with their caissons and most of the horses and drivers. What part of these regiments could be rallied assisted in the subsequent charge of the First Brigade upon a brigade of the enemy’s infantry. After dark the brigade was moved through Winchester and camped two miles out on the Valley pike.”

The Reserve Brigade’s total casualties for the battle were 103, including killed, wounded and missing. This was a little more than a third of the First Division’s 288, but the brigade was roughly half the size of Custer’s First Brigade and Devin’s Second Brigade. One of the men of the Reserve Brigade, First Sergeant Conrad Schmidt of the 2nd U.S. Cavalry, earned the Medal of Honor during the battle, but that will be detailed in a separate post.

I was not able to identify the members of the 2nd Massachusetts Cavalry killed during the battle. Regimental casualties included 3 men killed, 3 officers and 8 men wounded, 1 officer and 5 men missing or captured. Those of the three regular regiments are listed below.

In The Last Battle of Winchester, author Scott Patchan provides a comprehensive examination of the actions leading up to and including the pivotal battle of the Shenandoah Valley campaign.  Painstakingly researched, yet fast-paced and vividly written, I found it thoroughly enjoyable.

I’m always interested to see the evolution of a writer if I’m fortunate enough to read several of his or her works over time.  I enjoyed Patchan’s Shenandoah Summer (and reviewed it here), but to me this book was written on a higher level.

The author masterfully weaves an engrossing narrative on several levels simultaneously.  The book, as advertised, is indeed a battle history – over 200 pages address the battle itself.  Throughout the story, however, Patchan keeps the reader aware at all times of the larger context: within the campaign in the valley, within Grant’s overall strategy in Virginia, and within Lincoln’s political reality with an election looming.  Grasping this context is critical to understanding the battle and the campaign.  That he is able to do this while not bogging down the story is a tremendous feat.

I found the author’s coverage of the campaign very evenhanded.  He went out of his way to provide a thorough yet unbiased groundwork for the narrative.  I thought Early received a fairer treatment of his accomplishments prior to the battle than I had seen in other works.  Similarly, Sheridan’s caution before the battle and aggressiveness following it made much more sense to me after reading the book.

Patchan’s research is as enlightening as it is intimidating.  He obviously has spent years both researching the campaign and walking the ground on which it was fought.  His use of primary sources is remarkable, both for their sheer number and the way he weaves them into his narrative.  The descriptions of individual actions and combat at the regimental and company level bring the battle to life for the reader.

Cudos to Savas Beatie for using footnotes instead of endnotes.  Given the author’s extensive use of soldiers’ quotes to describe the action, footnotes greatly contributed to the book’s readability. And since I’ve mentioned the publisher, I must add that the book is of excellent quality and well worth the cover price.

Hal Jesperson’s maps are both detailed and plentiful, something all too seldom seen in battle and campaign studies.  I’ve previously found operations in the Valley confusing and difficult to follow, but in this book a map to orient myself was never more than a few pages away.  They provide a great support to the narrative.

Extensive citations, seven appendices and a bibliography over twenty pages long should satisfy even the most demanding reader or researcher.  Many of the primary sources appear to be previously unpublished.

This book provides extensive coverage of every move leading up to and including the battle itself.  I think anyone interested in this campaign or the Civil War would appreciate the book, and it is essential for the library of anyone seriously interested in operations in the Shenandoah Valley during the war.