Author’s note: The research for this post is not mine. It comes in its entirety from the inestimable Craig Swain, Civil War artillery expert extraordinaire. If you haven’t visited his blog at To The Sound of the Guns it is well worth a visit or ten. I don’t normally post about artillery, but after mentioning them in the last post it would be rude not to follow up with the photos.

As one enters Roselawn Cemetery, there is a memorial to the left side of the entrance. The Civil War memorial was erected in 1902 by the Women’s Auxiliary of the Grand Army of the Republic. The woman who spearheaded this effort is buried a few dozen feet away next to her husband. 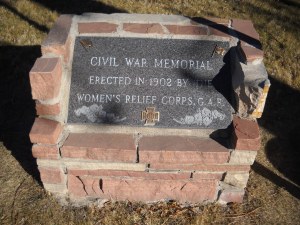 The two cannon are iron 24-pounder flank howitzers. They were not battlefield pieces, as they were too heavy. They were normally placed in the bastions of forts to cover the interior angles – the dead space near the walls not covered by cannon with longer range. They typically fired grapeshot and cannister across the moat of the fort to repel infantry assaults rather than dueling opposing artillery with solid shot.

Early in the war the Confederates tried placing them on field carriages and using them in the field, but the iron howitzers were simply too heavy to be easily used at roughly 1,500 pounds. The 12-pounder howitzer was frequently used in the field, as it was half of that weight and much more maneuverable.

The initials “J.W.R.” underneath the muzzles on both guns are those of the army ordnance officer who inspected it for quality, then-Major James Wolfe Ripley. He later achieved the rank of brigadier general and served as the army’s Chief of Ordnance for the first half of the Civil War. He was criticized during the war for being slow to adopt new technological innovations. On the other hand, Craig points out, he supervised a budget of $46 million at a time when ten cent cigars only cost a nickel.

The photos below are of the left howitzer, as an inconsiderate bird had defaced the muzzle of the one on the right side at the time of my visit. 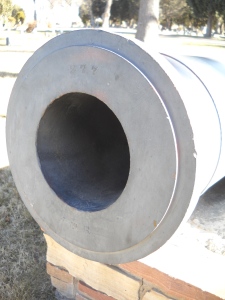