My father-in-law and I had a fantastic visit to Gettysburg this past weekend. Since he had never been there, my wife and I decided a couple of years ago that it would make a good 70th birthday present, so off we went. The fact that my birthday last week as well of course had absolutely nothing to do with it….

We arrived Thursday evening, and turned in early after dinner at Gettysburg Eddie’s and a quick visit to a deserted Reliance Mine Saloon.

Knowing how overwhelming the battlefield can be to the uninitiated, I’d reserved a tour through the Association of Licensed Battlefield Guides to provide an orientation to the field and overview of the battle. I’ve visited enough times to cover the basics pretty well, but not nearly as well as they do. Our guide, Paul Bauserman, did an excellent job with the tour, the best of the three times I’ve used the service, which says quite a lot.

On my previous visits to the area, I hadn’t visited the site of the battle of Fairfield, so armed with our trusty Complete Gettysburg Guide and a draft driving tour that Eric Wittenburg was kind enough to provide for proofing, we headed for Fairfield.

We had lunch at the historic Fairfield Inn, then moved out to the battlefield. I took pictures of the inn and a couple of other buildings significant to the battle or its aftermath, but due to an oversight managed to miss the building where Lieutenant Balder of the 6th U.S. Cavalry reportedly died. Despite Eric providing the street address. Argh. Thanks to the directions, it was quite easy to find this time, and I was able to gain a much better mental picture of how the battle progressed.

Afterward, we returned to Gettysburg and stopped by the national cemetery to pay our respects to the troopers from the regular cavalry regiments (primarily the 6th) who are buried there.

After a few more stops along the sites of some Day 1 fighting, we did some tourist treasure-hunting and called it a day. We had dinner at O’Rorke’s, where I’m not sure I’ve ever seen more food on a single plate in my life, and stopped by the Mine on our way back to the hotel.

I’d corresponded with Craig and Harry since they were in the area during the weekend to attempt a link up. Harry was busy doing productive things with the Saving Historic Antietam Foundation, but Craig emailed that he’d be up on Saturday. We coordinated to meet for lunch.

We began our second day on the field with a drive through Day 2’s fighting on the southern side of the field. Moving up toward the Pennsylvania monument, I rediscovered (oxymoron?) the Regulars Monument, which I hadn’t photographed before. Probably because Jenny Goellnitz’ website always has better pictures than mine anyway. We stopped for a couple of pictures and drove on.

It’s fortunate that we did, for who did we chance upon 200 yards further down the road, but Craig himself, spotted appropriately enough near some cannon. Remembering the picture-taking failure of the Longwood trip, we quickly remedied the situation. There really isn’t an informally designated photo place at Gettysburg like there is at the cannon in front of the visitor’s center at Antietam, so we just picked one and handed the camera to my father-in-law. 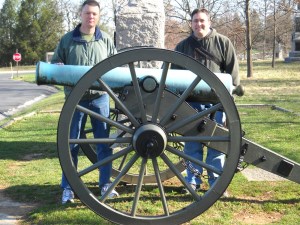 Craig had completed his work recording markers in town, and we decided to take a look at the markers near South Cavalry Field. Most I had visited before, but I hadn’t seen the marker denoting the detachment of the 1st and 2nd US Cavalry on Merritt’s left flank, which Craig was able to point out for us. I was able to get pictures of all 3 of my own 2nd US Cavalry’s markers on the field.

Craig also offered a good perspective on the fight itself, but that’s a post for another time. After an obligatory tromp along Pickett’s Charge and lunch at the Appalachian Brewing Company, Craig headed for York County. Tony and I headed back to Little Round Top and the Pennsylvania Monument, which for some reason I had never been up in before. Coming down, we took this picture that appears to belie 1864 claims by the Cavalry Bureau that cavalry horses didn’t grow on trees, also known as the monument to the 8th Pennsylvania Cavalry, one of my favorites.

We stopped by the new visitor’s center late in the afternoon before driving back to Baltimore. I miss the old one, but I haven’t made up my mind whether I’m for or against the new one. Our intent was to spend as much time as possible on the field, so it was largely irrelevant to our trip.

All in all, we had a great time. Thanks again to Craig for his generosity in spending hours tooling around the battlefield and educating us about Civil War artillery.