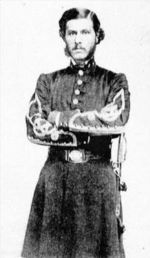 Frank Armstrong is one of the unusual few soldiers who had the distinction of leading both Union and Confederate troops into battle during the war.

Francis Crawford Armstrong was born on November 22, 1835, at the Choctaw Agency near Scullyville, Indian Territory. His father, Frank W. Armstrong, was an Army officer serving at the agency until his death during Frank’s childhood. His mother remarried soon after, to General Persifor Smith, a Mexican War veteran. He was educated at Holy Cross Academy in Worcester, Massachusetts, enrolling in his studies on January 19, 1845.

Frank accompanied his stepfather on a military tour of Texas in 1854. During an encounter with hostile Indians in New Mexico Territory near El Paso, Frank so distinguished himself that he was awarded a direct commission into the Army upon his graduation from Holy Cross the following year.

Frank Armstrong was appointed a second lieutenant in the 2nd U.S. Dragoons from Texas on June 7, 1855. He was initially assigned to Fort Riley, Kansas, where he served until June, 1857. He later served at Fort Leavenworth and on the Utah expedition until August 1858. Armstrong was promoted to first lieutenant, 2nd Dragoons on March 9, 1859. After a brief leave of absence, he was assigned to Fort Kearny as the aide-de-camp to General Harney until May 1861. Armstrong was promoted to captain, 2nd Dragoons, a month later on June 6th.

Captain Armstrong commanded Company K, 2nd U.S. Dragoons during the first Battle of Bull Run, and was attached to Colonel Hunter’s division. Disillusioned following the battle, he resigned on August 13, 1861 and enlisted in the Confederate Army.

Armstrong served initially as an assistant adjutant general on the staff of General Ben McCulloch until he was killed at the Battle of Pea Ridge. Promoted shortly thereafter to Major, he then served briefly on the staff of General James McIntosh. Armstrong was elected Colonel of the 3rd Louisiana Infantry, but served very briefly with them before he was given command of General Sterling Price’s cavalry.

He effectively covered Confederate retreats following defeats at Iuka and Corinth at the end of 1862, and was promoted to brigadier general in the Confederate Army on January 30, 1863.

He served through the majority of 1863 under General Nathan B. Forrest, effectively leading his brigade. He commanded a dismounted cavalry division under Forrest with distinction at the battle of Chickamauga. “The charges made by Armstrong’s brigades while fighting on foot would be creditable to the best drilled infantry,” said Forrest in his report on the battle.

In February 1864, Armstrong requested a transfer to the command of Stephen D. Lee, and was assigned command of a brigade of Mississippi cavalry. This brigade consisted of the 1st, 2nd, 28th and Ballentyne’s Mississippi cavalry regiments, and served under Armstong’s command until the end of the war.

Armstrong’s brigade was very active during the Atlanta campaign, then afterwards during Hood’s Tennessee campaign. He led much of Forrest’s rear guard during the army’s long retreat from its disastrous defeat at Nashville.

His last battle of the war was at Selma, Alabama on April 2, 1865. His hopelessly outnumbered command was overwhelmed by Union cavalry under General James H. Wilson. Armstrong escaped after the battle and later surrendered in Macon, Georgia.

After the war, Armstrong worked with the Overland Mail Service in Texas. He was later a U.S. Indian Inspector from 1885 to 1889, and served as an Assistant Commissioner of Indian Affairs from 1893 to 1895.

Frank Armstrong died at his daughter’s summer home in Bar Harbor, Maine after a long illness on September 8, 1909. He is buried in Rock Creek Cemetery, Washington, D.C.